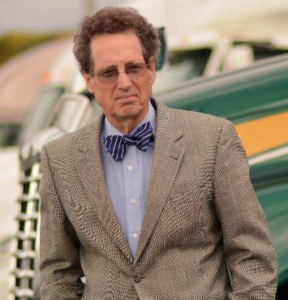 Hello everyone, I am glad to be on board!

As you may have already heard, Bob Voltmann has invited me to join the TIA as a consulting market analyst – your ‘in-house transport economist’.  I am highly flattered by Bob’s invitation and am happy to be associated with so many friends plus have the opportunity to make a lot more.  As part of my new role, I will regularly produce commentary about important topics.  The timing will be roughly every two weeks.  I say ‘roughly’ because it makes the most sense to write when there is something important to write about, rather than on a fixed schedule.  Since it is still early in the year, Bob asked me to address the outlook for 2019 in my first piece.  Here goes!

I’m an economist.  Of course, I say, “it depends”.  How a broker looks at the prospects for 2019 depends on their perspective.  If that broker is comparing it to one of the best years in history, last year, he or she will probably be disappointed.  Loads will be harder to find – spot volume could be down more than five percent; prices will be lower – perhaps as much as 10% down.  It’s like being on a small boat in a stormy sea.  One moment you are on the top of a wave, yet you know that you will be sliding down into a trough in just a moment.  But in trucking, we like to think that the good times will keep rolling.  Not so!  If you are comparing 2019 to 2018, a top of the wave year, it will not look good.   Now, if the broker is comparing 2019 prospects to an average year, it may look pretty good.  Even if things slip quite a bit, results are still well above average.  With a good start already in the books, the full year number should look fine even if the late-year run rates are down.  The year may feel weak – we will still compare it to 2018 – but the broker will make better than average money.

Things should look up for margins:  There is good evidence that brokers’ margins will go up in 2019.  History shows them to move in the opposite direction of the overall market; higher percent’s in bad years, lower in good years.  Since 2019 will not be as good as 2018, broker margins should go up.  This puzzling phenomenon has two explanations.  The first is just math.  Since broker costs stay relatively constant across the business cycle – and because margins reflect costs – margins also stay relatively constant across the cycle.  If so, then margins represent a smaller fraction of rates when prices are high than when prices are low.  They may go up in absolute terms in high-price years, but have a smaller share of revenue.  The other explanation is that truckers are more sensitive to market cycles than shippers.  Truckers cave on prices when times are tough then get disproportionate courage when markets are tight.  I have always said the truckers are ‘shy pricers’, except when they have plenty of emotional cover, as when driver shortages appear.

But isn’t economics the dismal science?  What’s the downside?  Now, turning back to prospects for 2019.  Of course, some brokers are natural worriers.  “I just hired ten new people or opened three new offices.  What if things go bad?  How will I cover those costs?  Well, there are two things to worry about in 2019.  Shippers are worried that the economy will boom as the President assures us, and that the market will tighten right back up.  It is possible, but not nearly possible enough to bet on.  The other thing to worry about is the opposite result, a declining economy.  The economy will decline some, that is highly likely.  But some economists, me included, are worried that the economy will begin drifting towards recession in the second half of the year.   Why?  This recovery is getting very old.  It is already the longest in history.  There are enough cracks in the current statistics to show the vulnerability of that age.  In addition, the global economy, including China, could go south in 2019.  That would hurt the U.S.

Recession?  Tell me when!  What does such a worry mean to 2019?  Probably not much for the first half, and not enough during the second half to ruin the whole-year results.  But what it does say is that 2020 could be a real bummer.   Economists do not generally like to forecast recessions.  So, it is telling that a number of them are beginning to talk about recession in 2020 openly. It follows that the worried broker will cover his costs in 2019, but maybe not in 2020.

Be prudent and start buttering up those shippers:  This all has two simple messages for brokers.  First, this is a time for putting money aside, not for spending a lot more on new equipment or people – unless you are taking a very long view and have the resources to easily move through a tough year or two.  Second, it is a great time to lock in good deals with trustworthy shippers.  Such relationships will come in very handy if the market slides.   2018 was a great year to bet on the capacity side.  In 2019 that emphasis will move towards the demand side.

Here’s the latest spot data:  I’ll close by reviewing the latest spot market pricing data from Truckstop.com.  You can clearly see the decline in pricing beginning mid-year 2018 and the slowing slide over the last month.  Because this data is referenced to the average from this recovery the current numbers demonstrate that the market is still relatively strong, just not as strong as a year ago.  As to 2019, the safest thing to say is that prices will remain roughly in the range they have occupied since Thanksgiving, leaving them above the average since 2009, but below last year.  That contrast is why I say your perception of the market this year will depend on your perspective.  If you are comparing it to last year, you will be disappointed, perhaps very disappointed.  If you are comparing to the average year, you are happy.  It’s just like we Eagle fans from Philly.  Compared to last year’s Stupid Bowl victory, that loss to the Saints in early January was a bitter blow.  Still, our team won a playoff game.  That was way better than being eliminated in November like most of the teams in the NFL.   The 2018 post season was a peak for us.  2019 was down but still pretty good.  I suppose some markets behave like Tom Brady, winning most every year.  None of the market you and I play in have a quarterback like that. 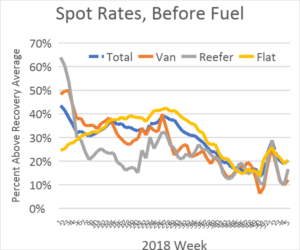 What about Washington?  One final thought.  Results in 2018 were heavily influenced by regulatory events.  This year they will not be.  Even before the arrival of my college classmate in the White House, 2019 was scheduled to be a lite year for new regs.  His business-friendly policy reinforces that.  Any changes in the trajectory of the price data above will have to come from the economy.   That’s why I emphasized the chance of recession.  Such a downslide is the most likely disturbance to the generally benign status quo.  Again, we should probably skate through 2019 – the risk will grow in 2020.  That’s the forecast: a decent year, somewhat above average – before the bottom falls out next year.

I need something from you:  I want these pieces to be relevant to your markets.  You can significantly help me do that by letting me know what you would like me to address.  What are YOU worried about? What are YOU excited about?  What have YOU noticed of interest?  What has YOU puzzled?  What keeps you up at night? Please contact me via telephone at 717-673-2998 or email me at nperry@transportfutures.net. I would love to hear from you. Please also take a few minutes to visit my website at TransportFutures.net. Again, it’s great to be on board.  I look forward to working with you.