As TIA continues to monitor the situation surrounding COVID-19 and it’s impact on the 3PL and transportation industries, here is your Daily Update for May 14. As a reminder, you can find all the latest information, resources, guidance, and news from TIA’s COVID-19 Response Center.

On May 14, 2020, the Federal Motor Carrier Safety Administration (FMCSA) announced that the Final Rule on the proposed changes to the Hours-of-Service regulations was being sent over to the Federal Register today for printing. The actual final rule will be published sometime next week and will take effect 120-days from the date of the publication.

This is a rule that the Agency began working on a little over two years ago to provide truck drivers with more flexibility in terms of their HOS. There were over 8,000 comments submitted to the notice of proposed rulemaking (NPRM). The following changes incorporate those comments and suggestions and have been made part of the Final Rule, following the 120-day period:

The new rule would not increase driving time and would continue to prevent CMV operators from driving for more than 8 consecutive hours without at least a 30-minute change in duty status.

TIA’s Highway Logistics Conference discussed the issue and drafted comments which were submitted to the NPRM in support of increasing flexibility in the driver’s time. If you have any questions, please contact TIA’s Government Affairs team at advocacy@tianet.org.

The news from the U.S. contagion is getting marvelously routine – another day with significant reductions in cases and deaths compared to the previous week. The Exhibit 1 middle graph shows the downward progress. The new chart below that shows how progress has occurred despite a continued increase in further tests. The rate of positive results of tests is now about a third of where it was early in April. That decrease indicates that the bug is attacking a declining proportion of our population. The new table at the bottom of Exhibit 2 shows where we are compared to the worst time of the contagion. We are almost a quarter down on tests and almost a third down on deaths.

It is safe to conclude that the U.S. is following the clear pattern established in Asia and Western Europe. This contagion has its limits – well below the catastrophic levels predicted by many experts early on and yet today. With four million data points collected, we have a statistically valid database to help us understand at least this stage of the COVID-19 contagion. Surprizes will have to come from subsequent phases or perhaps from the contagions invasion of South America and Africa, places where it is still on the rise. 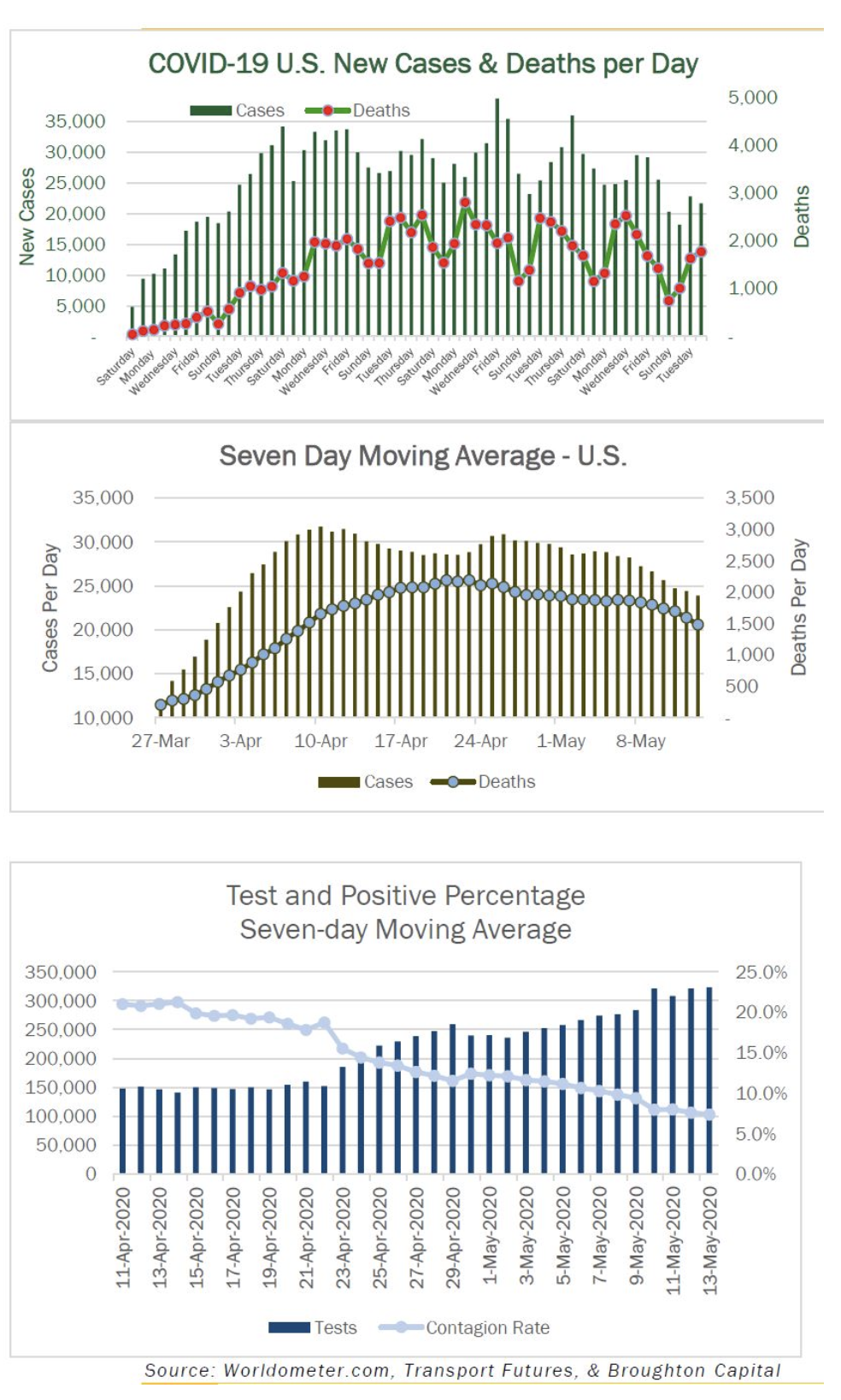 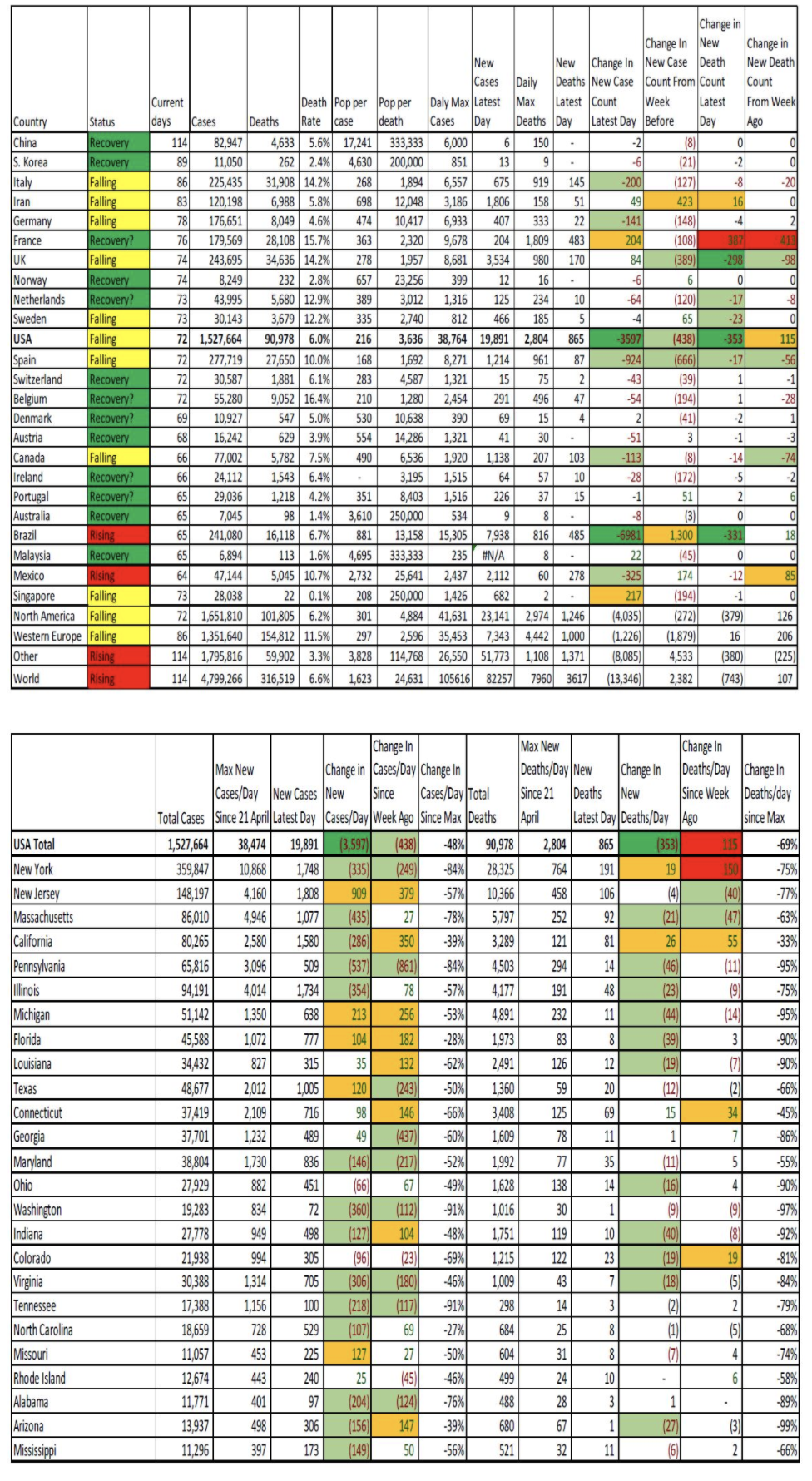 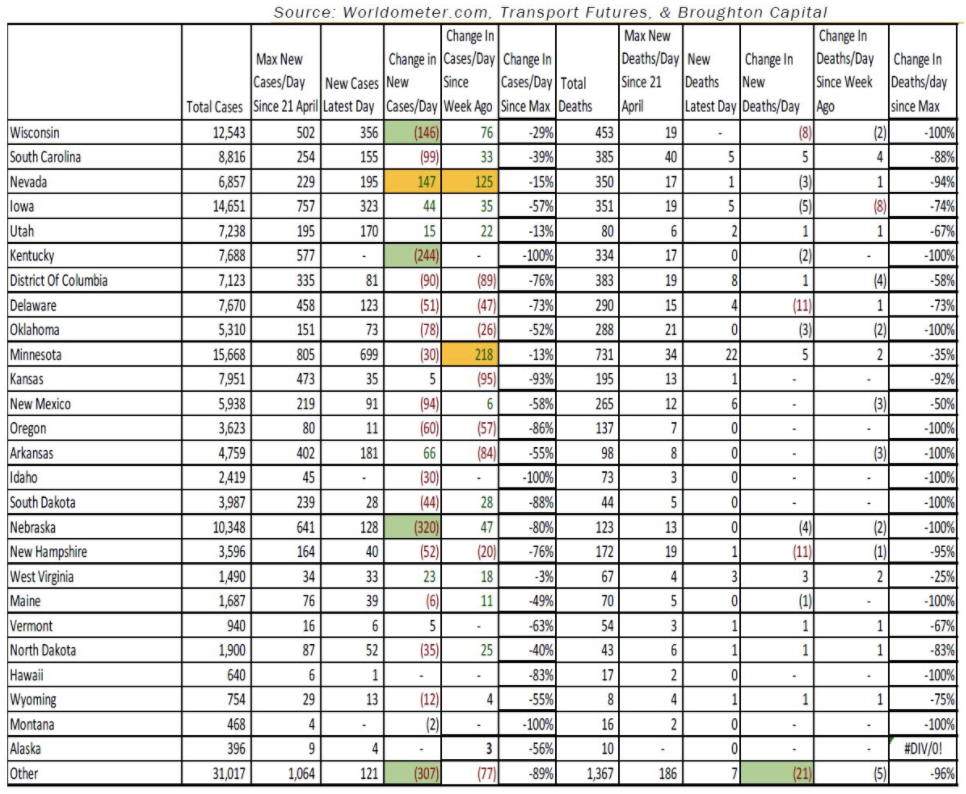 We’ll be back tomorrow with COVID-19 updates and information that came through overnight.